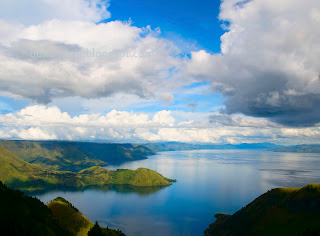 In a long time ago, lived a young man named Toba. He had two excellent abilities in terms of fishing and farming. When fishing, Toba was very astute and did not require a long time to get the fish. Just thrown the hook into the river, and he got the big fish.
One afternoon, he went fishing to a river that was wide enough. Within seconds after he threw the hook into the river, the fish immediately grabbed the bait and he got a big fish for dinner.
He immediately went home and along the way he continued pleased because of having enough fish for a dinner. He immediately moved the fish from the creel to the tub filled with water. He wanted the fish stay fresh when cooked so the taste was remarkably good. After putting fish inside the tubs, he prepared seasoning and firewood which needed in the process of ripening. Unfortunately, firewood in the house was out and he immediately looked for firewood in the forest.
Several hours later, he went home and carrying firewood pretty much to cook the fish. However, when he got home, he was surprised because the fish was lost. He even found pieces of gold, and a beautiful girl who was sitting in his room.
Furthermore, the beautiful girl told to Toba that she was the fish which arrested by him, and pieces of gold was the part of constitutes fish. He then asked that pretty girl to marry him. The beautiful girl agreed to his request, but he should not bring up the past of that beautiful girl. Toba approved it and they were married.
His wife and him got are blessed a boy named Samosir. His child was very agile, intelligent, but spoiled. When his child reached an age, there are task which should be performed every day, namely delivering the food into his rice fields. One time, his child felt very lazy to deliver food to the field and made his wife scolded.
Finally, his child forced usher these foods into the field. Because so upset, his child ate most of the food at the trip, then bring it to the field with just a little food. When food given to the Toba, of course he surprised and asked about it to his son.
Toba was furious to learn that his son had eaten the food. He said that his son was a child fish and his child came home while crying. His son complained to his wife and makes his wife so furious.
His wife was so angry and assumed that Toba had been violated the covenant. Although Toba had begged so much, but his wife would not forgive him and went with his son to the river. The Wife and his son turned into a fish again.
Instantly, the rain came in a very heavy and flushed Toba to sink. Heavy rains formed a lake known as Toba Lake.
Itulah legenda danau Toba dalam bahasa Inggris yang semoga bisa berguna bagi Anda.