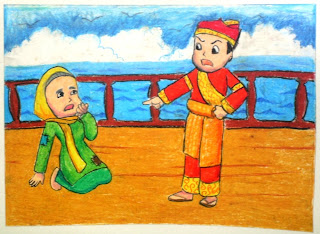 Once upon a time, lived a very poor family in West Sumatra and this was a family of Malin Kundang. To provide a living for his family, his father went to sea but never returned home. People talked about his father’s death and made his mother so anxious in each day. Furthermore, he was still very young and had not been able to help his mother.
However, life must go on. His mother did not want continuing to grieve and doing nothing. His mother chose to work hard and did a lot of jobs every day. However, his family financial had not improved since the money was only to meet their daily needs without being able to be saved.
Seeing his mother continued to work in each time, he did not have the heart and intended to help his mother. He asked his mother to sail and made money as much as possible. At first, his mother was not banned because of fear that Malin did not come back like his father. Nevertheless, he kept pressing until his mother allowed him to go.
He immediately set to sail because it has been allowed by his mother, and his departure was accompanied by his mother’s sobs. On board, he continued to learn and began to know the ins and outs of the ships and commerce.
Many years after the initial voyage, he had not had the opportunity to visit his mother in the hometown. Indeed, he was eager to go home but there were so many jobs to be done. In one time, he asked for permission to skipper of the vessel and allowed to go home. Malin was very excited and with the whole of crew, he returned to his hometown.
But, fate has not given him permission to go home. In the ocean, his ship was intercepted by pirates and all crew were massacred. He was very lucky because could hide and survived from the massacre. He ended up stranded on an island and worked hard to be a wealthy merchant. Fortunately, he was success. His wealth is so abundant because of hard working to build a wealth. He also married a girl who was very pretty and rich so that they could live happily.
With wealth and a prosperous life, he forgot to return home in order to meet his mother. However, inadvertently Malin had to go to his hometown for commercial affairs. He set off with his wife and children to come back home.
Arrived at his hometown, Malin Kundang met his mother and his mother hugged him very close. However, he even scolded his mother and pushed up a heap. He actually recognized his mother’s face, but there is a huge shame because there are crews as well as his wife. In front of them, he did not acknowledge that a woman who fell down was his mother. He even told her that her mother was so despicable and he did not recognize it.
After completing his business, he got out of his hometown. His heart had hardened into stone. With his wife and his children, he went sailing back. His mother was her sad and inwardly, he prayed that Malin changed into stone.
Instantly, the sky became overcast, lightning, and rain was falling. His ship hit rocks and was crashing. Malin bodies swayed to the opposite shore and the magic happened. He slowly turned to stone and it was known as Malin Kundang stone.
Itulah akhir dari kisah Malin Kundang dimana ia dikutuk menjadi batu melalui doa yang disampaikan oleh ibunya. Pelajaran yang kita dapatkan dari cerita tersebut adalah sikap hormat, kasih sayang, dan perlindungan harus terus selalu diberikan kepada orang tua karena mereka yang merawat kita hingga dewasa. Kita tidak boleh membantah apalagi hingga mencampakkan orang tua seperti yang dilakukan oleh Malin Kundang.
Semoga cerita Malin Kundang dalam bahasa Inggris di atas, mampu membuat Anda belajar menjadi pribadi yang lebih baik.