According to the theory of Plate Tectonics, the outermost layer of our planet is made of a thin slab and is relatively hard to move to each other. This movement occurs continuously since the earth was created up to now. Theory of Plate Tectonics emerged since the 1960s, and until now this theory has successfully explained the various geological events such as earthquakes, tsunamis, and volcanic eruption, and also about how the formation of mountains, continents, and oceans.

Below the lithosphere, there is a layer of molten rock called the asthenosphere. Because the temperature and pressure in the asthenosphere layer is very high, rocks move this layer to flow like a liquid (fluid).

The lithosphere is broken into several tectonic plates intersect with each other. Here are the names of tectonic plates on the earth, and its location can be seen on the map Tectonics. 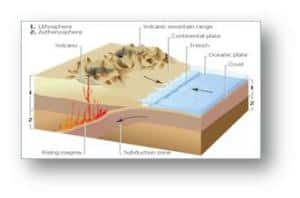 Simply put the earthquake can be described as “broken”, or because of their fault (also called fault or commonly referred to as “fault” by the geologists). What is broken? Broken rock is rock layers that make up the earth’s surface. Rock may indeed be layered and can be broken, even before it broke bend (folding) first. Below are some pictures that show it turns out there all around us even though we rarely notice.

Generally there are three types of fractures or faults, according to the mechanism, reverse fault (thrust fault or a reverse fault), horizontal fault or the fault shear (strike-slip), and normal faults (normal fault). Broadly speaking, earthquake occurs when rocks break, both the broken and rose, broken and shifted, as well as fractures and falls.

Thus, this further explains why the track is a subduction zone earthquake belt, or a place where the center of the quake. Subduction zone is a zone where the two plates meet, then that is where the pressure continuously for millions of years ago until now. At the time of pressure energy is getting bigger and elasticity of the rock is saturated then it will be broken to release energy such pressures, so the earthquake occurred “is NOT” because of the collision of two plates like two cars colliding provenance far between then suddenly collide, causing crash. It is the subduction zone earthquakes that occur due to the interaction between the two plates push each other so as to accumulate considerable energy, earthquake itself occurrs because of the condition of the rock on the plates (crust) and / or the lithosphere is broken to release the pressure energy that has accumulated there during the period of certain time. The seismic energy release mechanism is also vary and still be an interesting research for researchers in the field geosience and seismicity.

How to fault-fault existing in the mainland, such as the Sumatran fault which runs long and is divided into several segments? For fault-fault existing in the land, it will be a weak zone. The point is that the area will be earthquake prone areas because the rock has been broken, so it can be shifted back when under pressure or traction. Plus earthquake in the area of fault can be triggered by another earthquake which gives sufficient pressure on the fault line. Indonesian earthquake activity is one of the most steeper in the world. In National Earthquake Center on the 3rd floor of the building operational BMG, there can be seen a Seismotectonic map of Indonesia, which shows seismic activity (earthquakes) in the region of Indonesia. It can be seen there that Indonesia has a high vulnerability to earthquakes.